You can skip this one if you're not interested in on board systems, both high and low technology. On the low side we now have hot water, heated by the engine, an enlarged opening for the port lazarette, and a tuned up Atomic 4 engine with minimal water in the fuel tank. On the higher tech side we have added an AIS and DSC enabled VHF radio that listens to the GPS, new speakers for the stereo and a relocated and upgraded chart plotter. Somewhere in the middle we have custom canvas pockets for holding phones and iPads close to the charging outlets, and a permanently mounted LED anchor light above the renovated Bimini canvas.

I installed a Quick Nautic (Italian for "crazy expensive") 16 litre hot water tank in a more or less unused area of the port lazarette previously devoted to emergency firewood. Its most compelling feature was dimensional. It was slim enough to fit through the hatch opening, something I really wasn't. The hatch was 10.5 inches across, while the distance between the front and back of my rib cage is 11 inches unless somebody hugs me really hard. A little jigsaw work and the hatch opening is now 11.5 inches and you can hardly tell the difference. 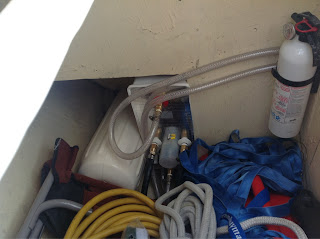 The plumbing for the water heater was pretty straightforward on the hot water side, a tee into the pressure water line feeds the bottom of the tank and hot water comes off the top of the tank to the faucets. On the engine side it required a complete replumbing to catch the hot jacket water at the thermostat before it was mixed with the bypass water on the way to the exhaust manifold. Details can be found at Moyer Marine and involve a plug and a tee and a bunch of hose, but just try to find a tee with a half inch male pipe thread and two half inch hose barbs on it. Of course, one can be assembled from a collection of 5 different bits of brass... Similar stories for the other bits and pieces so I really jingled as I left Home Depot. But hot running water... Priceless! 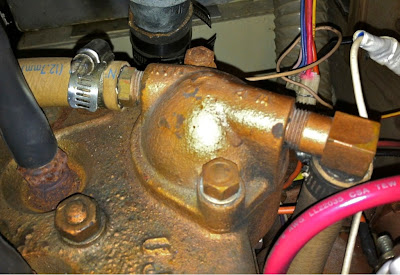 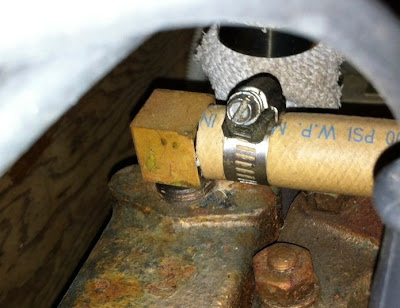 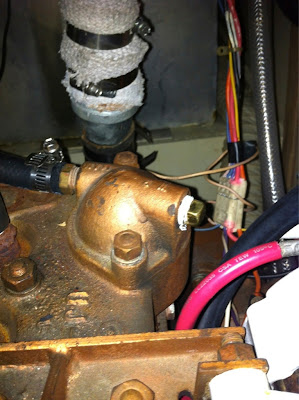 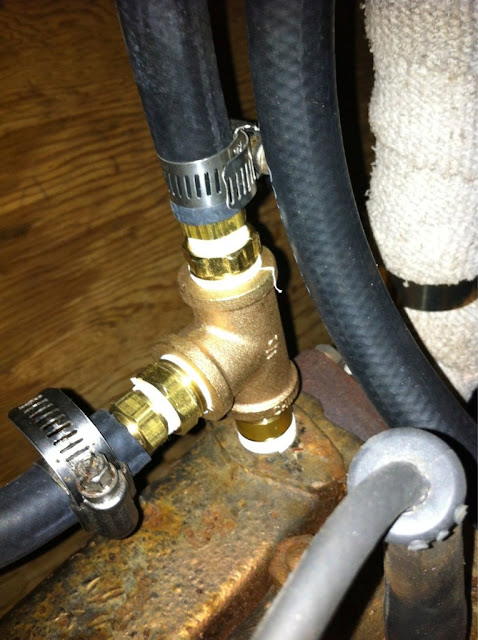 The water heats up quickly when the engine is running and is still warm enough to be good for doing dishes the next morning which was a real feature washing dishes this morning so we could have clean plates for breakfast. There's about 6 minutes worth of shower temperature water and a continuous flow of tepid water with the engine running.

Just after the jib ripped on that first day we started the engine, only to have it die again. Restart, Die, Restart, Die, give up and sail... About 24 hours later, it seemed prudent to get the engine sorted out. Sailing into Newcastle was beyond our confident skill set. The Atomic 4 was tuned up before we left with points, condenser, impeller, etc. so it had to be fuel, right? Heeled on port tack tilts the fuel tank so it sucks up any layer of heavier stuff, like water, in the bottom of the tank. I drained the float bowl, the fuel pump, and replaced the fuel filter / water trap. That got the engine to run for about a minute. Eventually I drained multiple liters of watery stuff by siphon down the fuel circuit and got the engine to run reliably. A little pondering and googling tells me I was a victim of ethanol phase separation and what I was siphoning off was more like vodka than water.

Our Navman chart plotter used to sit where the ginger ale is in the photo and would lose its position fix every once in a while, but only in tight situations. Moving it so the antenna is a little farther away from magnets and metal seems to have improved the situation. Adding a new chip provides coverage of Lake Michigan, Lake Huron, Georgian Bay and the North Channel. Caution when ordering C-Map chips: they have changed the coverage areas without changing the part numbers so you may not get what you ordered. 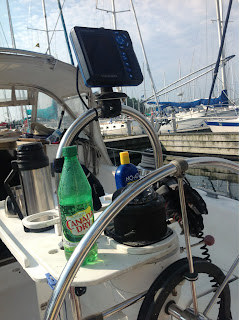 Laura has done a fantastic job with all sorts of boat canvas. She rebuilt the Bimini with geometry to suit the solar collector and a new window that's better finished than the pro windows on the dodger. Note the little anchor light permanently mounted with electrical tape at the upper left. We also have a bulkhead pocket for iGadgetry and a strip of pockets for those bits that were always cluttering up the galley counter. The iGadgets charge directly from the battery through a cigarette light plug adapter. 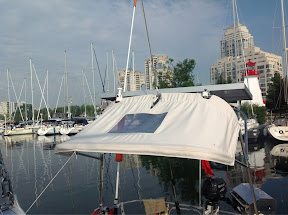 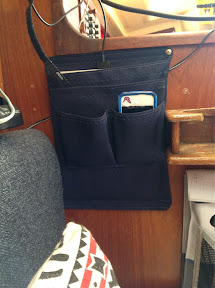 We located a pair of PolyPlanar speakers on the cockpit bulkhead in the holes that used to hold the defunct SR Mariner gauges. They are right beside the ST 60 speed/depth and wind instruments, but there doesn't seem to be any interference. One place we are noticing interference is anything electronic next to the Autohelm. Its compass is thrown way off by the radio mic or the camera set on the seat beside it.

The AIS radio is a Standard Horizon Matrix GX2150. It is taking its GPS feed from the old Garmin GPS 76 and the wiring was straightforward from the instructions. It has all the new DSC capabilities that we haven't figured out yet, but works just fine as an old fashioned "pick a channel" style radio. The AIS features are simple to use, allowing us to identify all the large vessels in the area and know which direction and how fast they are traveling. This has already been great use for avoiding collisions by avoiding close approaches. The other standout feature is the remote mic in the cockpit with control of all the features that are available on the front panel.

Their manual is a little opaque in places, but there's evidence somebody involved has a sense of humour. "11.7 Channel Name: When radio mode (NORMAL) is selected, the display will show a name under the channel number. This name describes the use of the channel. The radio has the capability to customize the name by the procedure below. Example: CH 69 PLEASURE to HOOKUP...."

- Posted using BlogPress from my iPad
Posted by Rick Sellens at 22:23