Kelley's Island to the Detroit River

July 12: The Seaway Marina on Kelley's Island has tons of space and 12 foot depth even in the back corner. 1.75 a foot is not so bad. Although there is a car ferry, most people seem to come over on foot and get around the island on a fleet of rental golf carts at $14 an hour. There wasn't nearly as much to be found in downtown as you might have expected for something labelled as "downtown" on the map. 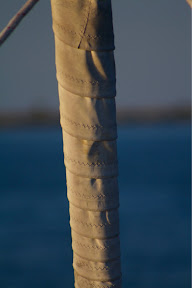 From Kelley's we did a drive by of Put In Bay, which looks like the place to go on your power boat to party your brains out. Not many masts in the harbour. Pointing the boat straight at the Detroit River, we narrowly missed Middle Sister Island. We were able to sail well into the river, but gave up when the current overwhelmed us around the BASF plant.

Mid afternoon we heard a Canadian Coast Guard alert about a bomb threat in the Windsor/Detroit Tunnel. Then the USCG took the lead, establishing a safety exclusion zone due to an "incident" in the tunnel. They never did tell us what the incident was, but dropped the exclusion in time for us to motor through and anchor off Grosse Pointe. Apparently the tunnel survived.