July 26: It's always easier getting out, no angst just following the plotter track we came in on. Motored until there was room, then reached off uneventfully under NE breeze almost all the way into Killarney.

We stopped at Killarney Mountain Lodge for a fill and empty on the way into the channel, then on to the brand new docks at Pittfield's General Store. We got some groceries, did laundry, and heard from Richard and June on their way in through Lansdowne Channel. We took advantage of the fish and chips fresh off the boat while the dryers spun.

We docked next to June and Richard at the Lodge. The grocery selection in Killarney is limited, but we managed steaks and mushrooms for six between two BBQs, with fresh salad and beans imported by Will and Sandra. It was great to see some familiar faces and enjoy dinner on First Light III. After dinner we enjoyed live entertainment in the Lodge bar, with the added plus that we were indoors through the mosquito hour. Probably the most time we have spent indoors so far this month ;-)

July 27: Patched the head tank up this morning, as the old patch had slipped a little in the pounding on the way to Bad River.

Then off down the channel and barely out of site of town to Powderhouse Bay. Repeated tries found only weed and chocolate pudding with the anchor, so we moved up to Covered Portage Cove where we found much better holding, halfway out into Killarney Bay with a nice breeze from the NE. Even the outer part of the Cove is well populated today. 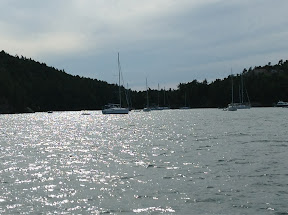