With the Whittons in McGregor Bay

August 4: We had a lazy morning swimming and taking it easy, knowing that we weren't going far, then headed back out into the main bay to meet our local guide.

John Whitton was a fine fellow and my great uncle. He passed away last February at 91. He and his family have always enjoyed their time with the community at McGregor Bay, so a second memorial service was planned for August 5.

John's son Ian met us in the middle of the bay and guided us in through the "Old Channel" near Harrison Rock. The chart was not encouraging, but we never saw less than 8 feet in the tight passage through the narrows and anchored safely in front of their cottage on West Sampson Island. It had been a long time, so there was a lot of catching up to do over a delicious rib dinner. The weather was light over night, but blew up to over 30 knots from the west for the service the next afternoon. Laura kept watch over Dragon III hanging to two anchors in the very sticky clay while we remembered John in the small Anglican church around the corner and up the bay. Lots of people arrived quite wet after the boat ride through the wind and waves. 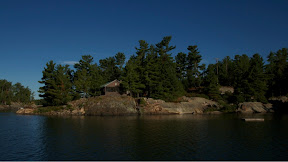 August 6: We bid the Whittons farewell this morning and managed to find our way back out without incident, thanks to a large collection of waypoint breadcrumbs I had scattered behind us on the way in. Rather than buck up into the westerly that was pushing 20 again, we turned east and wound up back in almost exactly the same spot as on our first night in the Bay. This time, we covered almost all of the distance under sail, and I had more time to enjoy the beautiful views as the navigational details were familiar.

August 7: So nice we stayed another day and explored a little by dinghy.