August 1: It took quite some doing to get the anchor up, but we were able to drive it out. Laura said she knew when it let go because the bow popped up about a foot. The harbour was down to four boats by the time we left.

We had an uneventful sail to Turnbull Island, falling in behind Allison and Rod so they could lead us in from the NW side of the island. We followed their path, even when they went on the south side of the rock pile where the Ports Guide showed a path on the north. We never saw less than 16 feet and made it out the same way the next day.

After anchoring we saw a pair of eagles soaring over the harbour and landing in behind one of the other little islands. Unfortunately, we didn't find them or any traces when we dinghied around to the other side of the island as part of our explorations. The Ports mentions bald eagles, but these ones didn't have the signature white heads.

We also landed on a small island in the bay and claimed it for Her Majesty, although she may not be paying much attention, what with the Olympics and all. Rod and Allison also went dinghy exploring, fortunately to windward, and discovered the limits of the battery capacity for their electric motor.

After our adventures we got together for a delicious mixed grill dinner in the cockpit of Leading Edge. We brought lamb chops and Greek salad that blended well with the steak and grilled veg. It turns out Rod likes lamb after all! 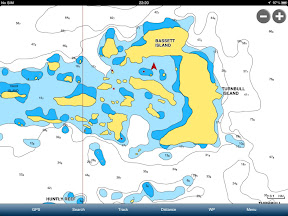