August 9: Mosquito Harbour lived up to its name last night. And then it rained... This morning there was a crisp breeze from the NE, so we reached NW to the islands along the north shore. We didn't quite make Eastern Island (where there are huge heads carved of Farquhar Butter from Manitoulin) but cut through the islands all the way over to the north shore. We then zigged and zagged back and forth between the rocks, down past Hogg Island then back out into the main channel at McTavish. We followed the north shore of Fox Island then ducked into Oak Bay.

It seems the weather forecast had a lot of people doing the same thing, so we were way up at the far end before we could find some shelter from the NE and avoid the mobs in some of the side inlets. The wind is forecast to rise to just short of a gale in the North Channel with gale warnings on all the adjacent bodies of water. We should see the strongest winds tomorrow morning. The little cove we picked provides great shelter and the holding seems good after getting the anchor through the weeds on the second try. We'll know for sure tomorrow. 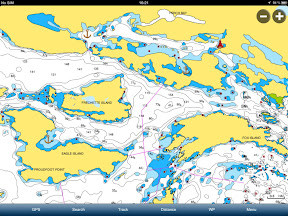 From here we'll head towards Gore Bay to meet up with Ralph and Mary and Marjorie.


- Posted using BlogPress from my iPad